Over a decade ago a independent music company based out of St. Louis, Black Pearl Entertainment/BPEnt, did the unthinkable by charting the music Billboard four times within a two year period. What made this accomplishment so gratifying was the father son duo of Yung Ro (Roland Sato Page Jr) and his father/manager Roland Sato Page Sr. captained the movement into victory. This was done when labels weren't offering hefty budgets to indie rap artist and encouraging artist to invest into their own brand. The BPEnt family fared the critics that a father/son relationship was not advisable in the rap game. Fast forward now, Yung Ro is one of the youngest and most prominent businessman in the St. Louis area. This go around he has the help of his younger brother Jiro Page to share some of the responsibilities. The father has taken a back seat due to Lupus which hindered some of his hand motor skills. The discouraging thing about this is most people know the main history of Black Pearl of being a famous tattoo shop for the past 25 years in the downtown area.
Many of Yung Ro fans wondered what happen to the new artist after all he was destined to be one of the hottest young talents to come out of the midwest. Now the answer to that question is apparent.. He had to step into his father's shoes and lead the enterprise. Yung Ro did just that as before with Jiro the two breathed a burst of youthful fresh air into the company propelling it to exceed the previous status of his father. A hard mold to replicate. Even though he still owns a recording studio he releases projects now and then. When asked about his music career he states, "Business first! I'm a father now so food on the table for my fam is the #1 priority. Plus returning the blessings that my father granted me. He gave Jiro and I a gift and we're giving one back to my pops."
With tragedy comes blessings. The son once managed by the father is now his father's manager. What? Yung Ro witness his father's mental depression so he encouraged his father to switch from visual art (Tattooing) to literary art. Thus introducing indie author Roland Sato Page and his manager Yung Ro. The after says, "It's funny how history repeat itself. My boys told me to get off my butt and continue to be the strong man they know me to be. So I did."
The St. Louis fictional author first project is a novel titled "Eating the Forbidden Fruit" a story loosely based on true events in his life as a St. Louis police officer convicted of federal drugs crimes. Roland Sr chose fictional genre to protect the privacy and careers of family, friends, and acquaintances that are characters in his story. Another reason is to clarify the history and rumors of his past.
"Well my story was over exaggerated by the media and the streets. When people hear a cop being locked up the first thing comes to mind is a corrupted police officer. First off I never used my authority to take anything from anyone or bring a person down. I will admit I didn't have the commitment to wear the badge because I can't turn on my childhood friends especially my family. A man who family came to this country and the only ones to depend on was ourselves. Just not in me. Family first always right or wrong. I do commend officers who do the job in a ethical manner, putting on that uniform every day can be stressful. However I enjoyed being around and serving my people. I never felt the us against them mindset. I would walk through the projects and meet some of the most humble and good nature people. My people. That is the reason Black Pearl/Pearl Tattoos are so successful. My sons DNA carry the same philosophy as I."
Eating the Forbidden Fruit was long over due since it was actually written during his federal trial and detainment. The delay was because legal counsel advised him to wait for his statue limitation is up. Recently author Page lost his mother to cancer. It traumatized his family, his mother Fumi Karasawa, a native of Osaka Japan named her grandsons. Yung is not just meaning young but a form of older seed in the Asian dialect. They fared through the storm. Yung Ro, Jiro, and his wife, Tracey Page, helped him update his book putting it into motion. The anticipation is spreading in the gateway city as well over the world.
Roland contributes the buzz because of the current law enforcement and community relationship.
"It's really a touchy topic. Social media wasn't around back in my days however the unethical acts were certainly around. It's coming into the light. I do believe there are more good cops than bad. If that were not true it would be more civil unrest than it already is. I would hate to imagine. If I can use my past experience to help be a liaison I would be more than happy to. Prevent young officers from making bad decisions. Indulging in immoral behavior can lead to criminal acts. Somewhat a God complex with immunity to repercussions. The book is so real and down to earth anyone will be able to relate. We all fall from grace one time or another. A tale of karma, confession, and redemption.
For those who are waiting patiently for the upcoming novel. You won't have to wait too long. The release date is March 2020 with a pre-order link available in late Jan 2020. Stay tuned with update or news on the whole Pearl movement via http://www.authorrolandpage.com IG: @thePearl_tatts TATTOOS IG: @yung_ro @jiropage Twitter: @Reppin_BPENT 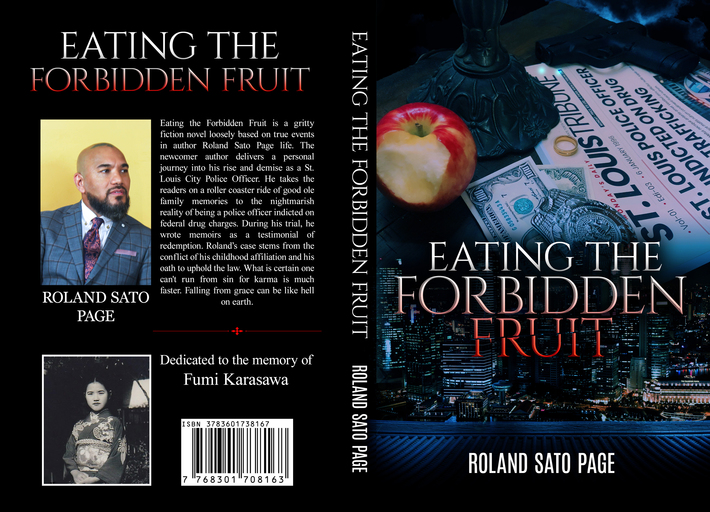