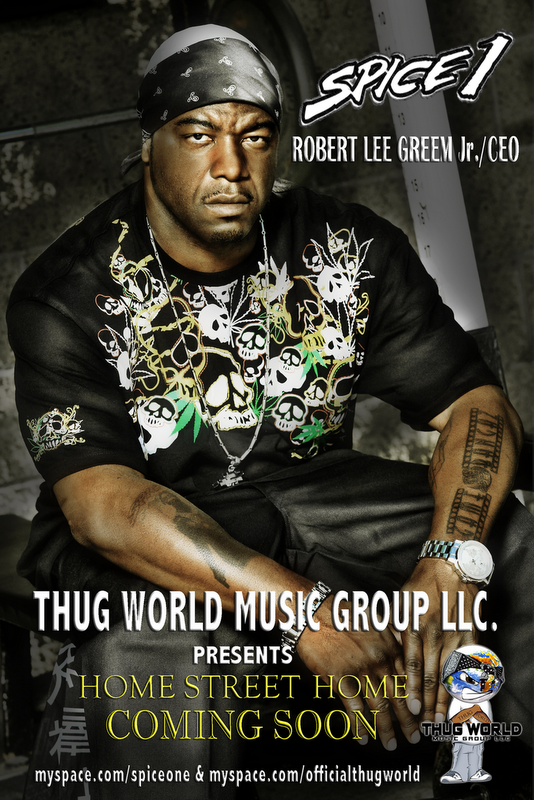 THE RETURN OF THE EASTBAY GANGSTA – SPICE 1
Spice1 known for his unique hardened flow, this rap legend is ready to claim his
Thrown once again. With great talent like NWA, Easy E, Ice –T, Spice 1 is responsible for inventing the hardcore street sound known as “Reality Rap” or “gangsta Rap.”

These tales of the rough street life in the inner city struck a chord though out America and permanently altered the modern music of today. Spice1 dropped his fist album “Let it be know” in 1988 and he hasn’t looked back since. Spice 1 has performed with some of the great MC’s, 2Pac, Method Man. Ice-T, Too Short, E-40, MC Eith, WC, Ant Banks, Mack 10, The Luniz, C-Bo, MC Breed, Roger Troutman, The Tones, Daz & Kurupt, and Numerous others. Despite selling over 7 million records, Spice 1 has never achieved mainstream popularity. The world is about be awaken because this rap legend is about to shake up the music hip-hop industry.Spice 1 is working hard on his new album “One In A Million” it features phat tracks produced by multi platinum producers. Battle Cat, Clint “Payback” Sands, KeyTech,Goldie Loc, Trev Jr. Cold Fusion, and Rick Rock the super producer. Guest Appearances By Kurupt, Goldie Loc of Tha Eastsidaz, Dru Down, Yo Yo, Kokane, and more to come.Spice 1 has historically written some of the most hard-edged and vivid lyrics involving tales of bangin’, gats, robbery, murder, drugs, and the sad tales of the innocent surrounding of street life. After (9) albums, those lyrics are as potent and urgent as they were on the day his first album was released. Spice 1 is still considered one of the best rapper in the industry to date delivering lyrics in an original, yet with a smooth style.
He can shift from fast to slower tempos with a relative ease. What makes spice 1 different and unique is his flows. Even though spice 1 keeps it gangsta 9 times out of 10. But unlike other rappers Spice comes up with different styles, some call it ragga – influenced
While most of the time he manages to stay true to his trademark fast flowing style, you might even consider him the originator of the triple cadence staccato styling that was
Later popularized by Bone Thugs-n-harmony and others. Tyruss "Big Syke" Himes was born and raised in Inglewood, California. In the early 90s he became friends with Tupac. Syke was teached Tupac about the streets and Tupac teached Syke about the rap game. Syke, Macadoshis, Mopreme Shakur, The Rated R and Tupac started working on an LP, Thug Life Volume 1. One of the songs that'd be on it was "How Long Will They Mourn Me?" which featured Nate Dogg and was dedicated to Syke's murdered friend Kato. Tupac told Syke to take his pain out on the song and it turned out good.  On September 26, 1994, Thug Life Volume 1 was released. It sold gold, which was good, but not as good as they expected. A lot of people blamed Interscope Records who edited and removed a lot of songs from the Lp due to them being too hardcore and underground. The first single and video was "Pour Out A Little Liquor." It was A Tupac solo song and didn't feature Syke nor any other members of Thug Life. Syke was on the three other singles and videos, "Cradle To The Grave," "How Long Will They Mourn?" and "It Don't Stop," though.  In 1995, Bruce "Fatal" Washington, Katari "Kastro" Cox, Malcolm "E.D.I." Greenidge, Mutah "Napoleon" Beale, Tupac and Yafeu "Kadafi" Fula founded a group, the Outlaw Immortalz which was later re-named to the Outlawz. Syke was recruited to the group. Tupac had given the members of the group aliases taken from political men hated in America, Tupac gave Syke the alias Mussolini, after former Italian president Benito Mussolini. The Outlawz made their debut on "When We Ride" on Tupac's double LP, All Eyez On Me, which was released on February 16, 1996. Shortly after the release Syke left the Outlawz.  He signed with Rideonum Records/TNT Recordings as a solo artist which released his solo LP, Be Yo Self, on October 16. Since then Syke has been very quiet. He has mostly guest appeared on other artist's albums and compilations and soundtracks. In 2000, he signed with Rap-A-Lot Records where he recorded an album, Big Syke Daddy, Where You At? In 2001, he left Rap-A-Lot Records and the album was never released. He signed with D3 Entertainment/DNA which is set to release his third album this year!
Mc Eiht 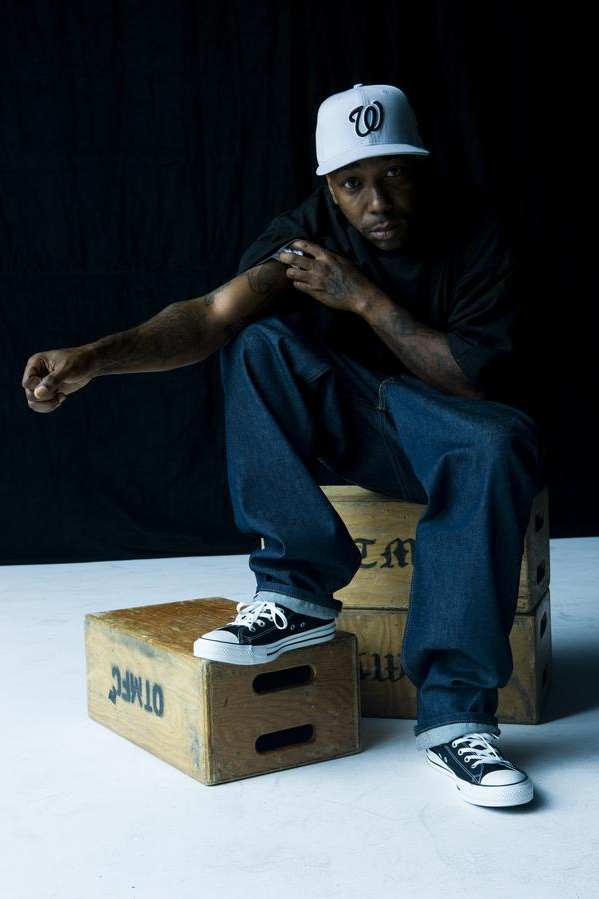 Veteran West Coast gangsta rapper MC Eiht dedicated much of his life to rap, beginning his seminal career with Compton's Most Wanted (CMW) while only a teenager. Despite his youth, Eiht's contributions helped catapult CMW to national fame in 1990 with It's a Compton Thang. The group followed the lead of fellow Compton gangsta rappers N.W.A, but were a bit less controversial and, in turn, much less popular. CMW released two more albums -- Straight Checkn 'Em (1991) and Music to Driveby (1992) -- before Eiht began his solo career in 1993 with the group's producer, DJ Slip, in tow and "Steiht Up Menace" as his solo debut single. His debut solo album, We Come Strapped, topped Billboard's R&B album chart a year later. Eiht's sales numbers unfortunately went downhill from there, though he retained a cult audience over the years and remained loyal to longtime affiliates Slip and Mack 10. Born Aaron Tyler in Los Angeles, Eiht began his career as part of CMW while still a teenager. After the song "Rhymes Too Funky" became a local hit, the group signed to Orpheus, who released three albums by the group: It's a Compton Thang (1990), Straight Checkn 'Em (1991), and Music to Driveby (1992). These albums offered several singles for the group, but none measured up to Eiht's solo debut, "Streiht Up Menace," in 1993. The Slip-produced ballad came from the Menace II Society soundtrack, a popular film Eiht had acted in. Following the success of this single, Eiht signed to Sony's Epic Street division and entered the studio with Slip to record his full-length solo debut, We Come Strapped. Billed as "MC Eiht Featuring CMW," the album didn't really feature anyone from CMW except the rapper and producer. Nonetheless, the album debuted atop Billboard's R&B album chart despite lacking an omnipresent lead single and reached the Top Five of the pop album chart. The album also garnered headlines for featuring not one, but two parental advisory stickers (Sony claimed no responsibility for the lyrical content). None of Eiht's successive albums were as successful as We Come Strapped, though some were arguably better. Following his initial success in 1994, the rapper returned in 1996 with Death Threatz and 1997 with Last Man Standing. Both albums featured production by Slip and were arguably better albums than Eiht's chart-topping debut, yet Epic remained unimpressed and parted ways with the Compton gangsta rapper. It didn't take long for Eiht to return, though. He signed to Mack 10's Priority-distributed Hoo Bangin' label and recorded Section 8 (1999), his most diverse album to date, if not his best. In successive years, Eiht recorded albums on an annual basis: "N" My Neighborhood (2000), Tha8t'z Gangsta (2001), and Underground Hero (2002), all but Tha8t'z Gangsta for Hoo Bangin'. None of these albums topped the charts, but Eiht continued to move his career forward. For instance, he appeared alongside Ice Cube and Mack 10 in the 1999 film Thicker Than Water and even reunited with Compton's Most Wanted in 2000 for Represent.

THE 300+ AVAILABLE ARTISTS THAT WE SERVE HERE